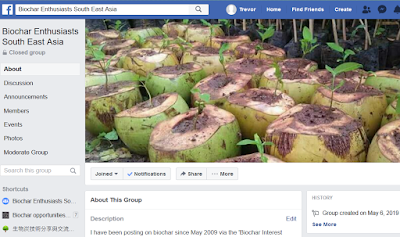 I will push out another newsletter under the current format to circulate the news.
Posted by Trlahh at 9:59 pm No comments: Links to this post

Posted by Trlahh at 12:24 pm No comments: Links to this post

Posted by Trlahh at 7:04 pm No comments: Links to this post 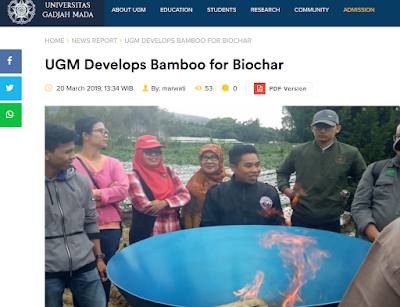 
"Faculty of Agriculture UGM established a consortium with Universitas Syiah Kuala, Universitas Andalas, Universitas Udayana Ghent University, Belgium, to do research in using bamboo as biochar. Biochar is active charcoal use to improve soil and reduce agricultural environmental pollution. It is also potential to maintain soil fertility.
The cooperation that lasts for three years started this year with the Flemish Interuniversity Council Belgium and promoter Prof. Stefaan De Neve from Ghent University and Dr. Benito Heru Purwanto from UGM.
Heru Purwanto said the research had started since November 2018 by inviting representatives from five universities. In March a discussion, workshop and field visit were made at Sidorejo village in Ngablak, Magelang. “Alongside the event we held a discussion that was attended by an internal tim project and doctoral students conducting biochar research at UGM,” said Heru in a release sent on Wednesday (20/3).
Heru explained although still preliminary, the biochar research cooperated with researchers from research agencies in the country as well as biochar experts from Balai Penelitian Tanah Bogor and Balai Penelitian Tanaman Rawa South Kalimantan.
“We also invited farmer groups to do biochar making practices,” he said."
Posted by Trlahh at 11:01 am No comments: Links to this post

Overall, the results established that rice husk biochar can be used as a soil conditioner to enhance upland rice yield on an Alﬁsol. The combined dose of 3–6 t/ha−1 biochar and 30 kg/ha−1 of N fertilizer is thus recommended for upland rice farmers in the study area.
Posted by Trlahh at 4:28 am No comments: Links to this post

The following news was posted to the IBI February newsletter:
"A good deal of research on biochar comes from Indonesia, but much of it misses mainstream academic publications. A new three-year project is underway led by Ghent University, Belgium to help the Indonesian scientific community obtain better worldwide standing using their bamboo biochar industry as a sample case."
From the website:
"This networking project in essence addresses the problem of low soil fertility and related food security issues in Indonesia by harnessing the potential of bamboo derived biochar for soil improvement. Given the high scientific and societal impact of biochar research, notably in soil science, the production and use of bamboo biochar (in a limited number of field experiments) will allow us to address probably the main challenge in academic research in Indonesia, namely the limited international impact. Within this project, biochar will be used as a case study to very significantly increase the international impact of the participating universities, through the organisation of workshops on hypothesis testing, on experimental set-up and on scientific writing with impact, through bringing the Indonesian partners into contact with non-Indonesian research institutes with internationally successful biochar research, and through the sharing of experiences and the learning process over the entire project duration. The inclusion of diverse universities from Java, Bali, West Sumatra and Aceh will maximize the overall project impact.ic community obtain better worldwide standing using their bamboo biochar industry as a sample case."
Posted by Trlahh at 11:23 am No comments: Links to this post

CONCLUSION: The SPMP approach showed exceptional promise to produce biochar with low H/C ratio (0.5) and O/C ratio (0.2), which indicated a high degree of carbonization and stability of the biochar to act as a durable agent in wastewater treatment.
Posted by Trlahh at 1:18 pm No comments: Links to this post

BACKGROUND: Spent mushroom substrate (SMS), largely produced as an agriculture waste from mushroom cultivation, was transformed into biochar via microwave vacuum pyrolysis under different ratios of SMS to microwave absorbent (1:1, 1:2, and 1:3). The biochar was then examined for its potential to be re-used in mushroom cultivation as a growth medium added to conventional mushroom bag log (plastic bag with mushroom seeds and culture substrates containing rice straw, sawdust, lime and water), with emphasis on its ability to form mycelium – a fungus that grows into mushroom from its seeds.
RESULT: The pyrolysis generated up to 36 wt% biochar yield with a large adsorption area (up to215m2 g-1) and less water (4 wt%), indicating that many adsorption sites are available on which mushroom seeds, nutrient and water can be adsorbed onto in order to form mycelium (and subsequently mushroom). The biochar added to grow mushroom in bag log recorded a higher water retention percentage (up to 59%), a higher mycelium colonization length in 8 days (6.3 cm), coverage area (up to 259 cm2) and total mycelium growth volume (317 cm3), and resulted in a higher yield of mushroom (200 gmonth-1) than that recorded for the conventional bag log without biochar (160 gmonth-1).
CONCLUSION: The results indicated that biochar produced from SMS using microwave vacuum pyrolysis shows great potential in retaining water and nutrient that in turn promotes the formation of mycelium that leads to increased growth of mushroom in its cultivation.
Posted by Trlahh at 12:47 pm No comments: Links to this post 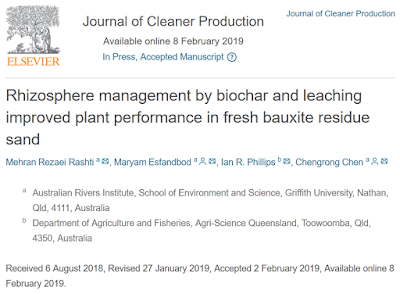 Posted by Trlahh at 1:56 am No comments: Links to this post

"Low nitrogen (N) content and retention in bauxite-processing residue sand (BRS) disposal areas pose a great challenge to the establishment of sustainable vegetation cover in this highly alkaline environment. The budget and fate of applied N in BRS and its potential environmental impacts are largely unknown. We investigated the effect of combined application of biochars [aged acidic (AC) vs alkaline pine (PC)] and di-ammonium phosphate (DAP) fertiliser on ammonia (NH3) volatilisation, nitrous oxide (N2O) emission and N retention in a 116-day glasshouse study. The application of AC to BRS decreased pH (≈0.5 units) in BRS, while PC biochar increased pH (≈0.3 units). The application of AC reduced NH3 volatilisation by ca. 80%, while PC by ca. 25%. On the other hand, the AC treatment increased N2O emission by 5 folds. However, the N loss via N2O emission in the AC treatment only accounted for ca. 0.4% of applied N. The reduction in BRS pH and increased retention of mineral N due to the presence of oxygen-containing (phenolic and carboxylic) functional groups in AC may be responsible for reduced NH3 volatilisation and increased N2O emission. This study has highlighted the potential of biochar (particularly aged biochar) in improving N retention and minimising environmental impacts in highly alkaline environments."
Posted by Trlahh at 9:43 pm No comments: Links to this post 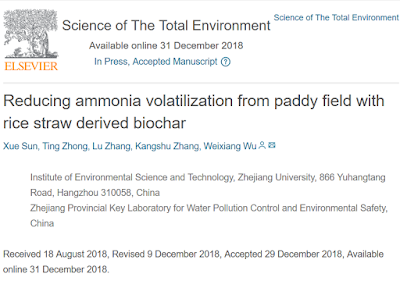 Ammonia (NH3) volatilization is a major loss of nitrogen fertilizer in paddy fields. The incorporation of straw or biochar has been considered to be the alternative options for soil improvement and agriculture sustainability. A field experiment was conducted to evaluate the potential role of rice straw and rice straw derived biochar in controlling NH3 volatilization according to the conventional nitrogen fertilizer level (urea, 270 kg N ha−1) during one rice (Oryza sativa L., cv. Xiushui134) growing season. Four treatments comprised rice straw at the rate of 8 t ha−1 (RS); rice straw derived biochar at the rate of 2.8 t ha−1 (RSBL); rice straw derived biochar at the rate of 22.5 t ha−1 (RSBH) and a control (CK). Compared to straw application, biochar incorporation reduced the cumulative NH3 volatilization (about 20%) from paddy fields significantly (p < 0.05), promoted rice yields and plant N aboveground as well as increased the abundance of ammoxidation amoA genes. In contrast with control, the ratios of NH3-N and total N input for RS, RSBL and RSBH declined significantly 4.15%, 4.40% and 11.12%, respectively (p < 0.05). Reduced NH3 volatilization in RSB treatments were mainly attributed to the decrease of NH4+-N concentration in the surface water, which could resulted from the enhancement of rice growth and the promotion of ammonia oxidation in soil. The increase of soil pH and soil CEC with biochar amendment played an important role on nitrogen retention and nitrogen cycle in soil. These results indicated that the incorporation of rice straw derived biochar instead of rice straw could be a promising approach to control NH3 volatilization and improve rice yield.
Posted by Trlahh at 12:24 pm No comments: Links to this post

In a 56-day experiment with 6 local Yellow cattle fed ensiled cassava root-urea, brewers’ grains and rice straw, there were indications (p=0.08) that after an initial 4-week adaptation to the diet, the cattle were growing faster when 1% of biochar (derived from rice husk) was incorporated in the diet.
Posted by Trlahh at 11:51 am No comments: Links to this post

I've just discovered 57 comments awaiting moderation!
I did not have blogger configured properly (to get notice of a comment).
Some comments dated back to 2016!
Fixed now.
Humble apologies from the hopeless editor.
Posted by Trlahh at 10:48 am No comments: Links to this post