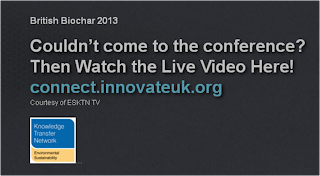 The British Biochar Foundation have generously provided video recordings on all presentations from their recent conference in Oxford. The conference was broadcast live as well... lets hope this is a new trend for remote conference attendance.

This new publication on rice husk char application and testing can be added to the extensive list of research papers and interest in using these crop wastes as a biochar soil amendment. A search on this website for 'rice' will provide links to 14 previous posts related to the subject of RHC.
ABSTRACT
"Rice husk charcoal (RHC) is a by-product of rice processing mills which can befound in very large quantities in these mills. This industrial waste is largely unutilized, causing environmental pollution especially in the state of Kelantan. In order to increase its utilization, RHC was characterized and investigated for its potential in enhancing the composting process. Physico-chemical properties of RHC such as pH, nutrient content, ash content, CEC, adsorption kinetics, surface area, functional groups, surface structure and pore sizes were studied. The composting treatments were carried out by mixing 4% (wt/wt) and 6% wt/wt) RHC with organic substrates and with no RHC amended as control. Parameters such as daily temperature, CO2 flux, nutrient content, pH, moisture and total microbial count were measured during the composting process. Results showed that RHC is a highly alkaline material (pH 8.9) with a carbon content of 16% (wt/wt dry basis), CEC of 17cmol kg-1soil, BET surface area of 401 mg g-1 and a methylene blue Adsorption capacity of 38.8 mg g-1. The presence of C=O carboxyl-C, ketones and ester, aliphatic C=H, C=C benzene ring and C-H aromatic hydrogen suggests that RHC mainly comprises amorphous char, a random mixture of thermally altered molecules and aromatic polycondensates. The addition of RHC to organic matter accelerated the composting process through higher decomposition rates due to higher microbial population at the thermophilic stage with RHC acting as a bulking agent, as well as higher moisture and nutrient retention during composting. N losses were found to be lower with RHC composting."

Posted by Trlahh at 4:50 pm No comments:

I've finally got around to going back through all my old posts to add tags (labels) for keyword searching - this works well for searches on location or subject.
Posted by Trlahh at 4:21 pm No comments:

Name and shame companies behind haze: Singapore
"Singapore is calling on Indonesia to name the companies behind the illegal forest burning which has caused serious haze pollution this week across the Republic.

In a joint statement, both Minister for Foreign Affairs and Minister for Law K Shanmugam and Minister for the Environment and Water Resources Dr Vivian Balakrishnan said they had spoken to their Indonesian counterparts to express their concern about the worsening haze situation.

Both Ministers had asked Indonesia to share the names of errant companies involved in illegal burning, as an Indonesian Forestry Ministry official had said that Malaysian and Singapore palm oil companies that had invested in Indonesia may be responsible for starting the fires in Riau."

I think there are practical solutions for changing these polluting and wasteful land clearing practices (and assuming they are legal!). Managed trench combustion has been demonstrated by Nik Foidl in central & south America to produce biochar for localized soil amendment.


How corruption is fuelling Singapore's haze

A follow-up to previous post on Josh's work
Posted by Trlahh at 9:19 am No comments:

Biochar making (Philippines) ... where are the TLUD's?

"With many Filipinos still dependent on agriculture, the government faces the challenge of reviving the sector that has posted sluggish growth over the past several years.

Agriculture is also suffering from a degraded environment partly caused by chemical use in farming.

At the first National Conference on Philippine Biochar on April 17, agriculture experts and government and private sector representatives proposed a way to improve soil fertility—biochar, or agricultural waste transformed into organic fertilizer.

The carbonized rice hull (CRH), a type of biochar, is an example of a product of the partial burning of rice hull. Instead of turning the outermost cover of rice grains into waste, it can be carbonized and turned into soil fertilizer. ...."

The article includes a chart on production but is not a step-by-step guide and does not seem to include TLUD which I think is a serious omission. Energy utilization should be an important aspect for the future and TLUD is a great pathway via cook stoves.  A search on this site for "TLUD" pulls 4 reports... particular emphasis on the work of Paul Olivier in Vietnam (4Mar12 & 28Aug12).
Posted by Trlahh at 2:42 pm No comments:

More on Urban use of biochar


Looking past the unfortunate terminology describing biochar as "fertilizer", this article should be of interest for urban environments...


... “It seemed like a beautifully ecological and non-chemical fertilizer,” Jacobs said. He had seen evidence that biochar improved agricultural productivity, but nothing for landscaping. “We took a leap of faith.” In the first year the honey locusts grew 24 inches, or about twice what Jacobs expected. Two years later, “They have continued to grow like... weeds,” he said.
Urban soils often lack carbon and struggle to sustain the diverse microbial communities that are essential to plant growth. Essentially charcoal, biochar is loaded with carbon and fosters microorganisms so well that it has been called a coral reef for soil.
Jacobs is quick to note that every site is different, and that his project isn’t a scientific study. But the cost difference is negligible, he said, and “something is making those trees grow better.” He now uses biochar in most of his downtown landscaping projects, as well as in his own garden. ...
http://www.wbez.org/blogs/chris-bentley/2013-06/chicago-landscapers-turn-ancient-amazonian-fertilizer-107645
Posted by Trlahh at 11:12 am No comments:

This paper has appeared in Soil Use and Management, September 2012, 28, 329–336
Application of char products improves urban soil quality
Abstract
"Urban soils are a key component of the urban ecosystem but little research has considered their quality and management. The use of char or partially combusted char products as a soil amendment is becoming popular worldwide because of perceived beneﬁts to fertility and the potential for increasing carbon sequestration. In this study, we assessed the effect of applying coarse and ﬁne char material on the quality of four different types of soil-based root-zone mixes typically used for turfgrass and general landscaping in Singapore: clay loam soil, approved soil mix (ASM, 3 soil:2 compost:1 sand), 50:50 (sand ⁄soil) and 75:25 (sand ⁄soil). Char briquettes made from sawdust were mixed thoroughly at rates of 25, 50 and 75% by volume with the soil mixes. Results showed that addition of char (both coarse and ﬁne) signiﬁcantly enhanced the carbon content of the mixes, with the largest increase being associated with the 50% and 75% additions. Soil nutrients (total N, extractable P, K, Ca and Mg) and mean weight diameter of aggregates were also signiﬁcantly increased following the application of char. The clay loam and the 50:50 and 75:25 soil mixes were more responsive to the addition of char than was ASM."

Abstract
"Two in vitro incubation experiments were conducted to test the hypothesis that biochar would serve as support media for biofilm development in a biodigester and would as a result increase the yield of biogas whether added separately or enclosed in a nylon bag The treatments in experiment 1 were: control (no biochar), biochar added at 1% of the substrate DM in the biodigester, biochar added at 3% of the substrate DM in the biodigester. The substrate was fresh manure from cattle fed dried cassava root, fresh cassava foliage and urea. Proportions of water and manure were arranged so that the manure provided 5% of the solids in the biodigester. Gas production was measured daily over the fermentation period of 30 days; methane in the gas was measured after 21 and 28 days. In experiment 2, a 2*2 factorial arrangement with 4 replications was used to compare level of biochar: 1% of solids in the digester or none; and presence or absence of a cloth bag in the biodigester. The fermentation was followed over 21 days with daily measurement of gas production and content of methane in the gas at the end of the fermentation.

In experiment 1, incorporation of 1% (DM basis) of biochar in the biodigester increased gas production by 31% after 30 days of continuous fermentation; there were no benefits from increasing the biochar to 3% of the substrate DM. The methane content of the gas increased with the duration of the fermentation (24% higher at 28 compared with 21 days) but was not affected by the presence of biochar in the incubation medium. In experiment 2, adding 1% of biochar (DM basis) to the substrate increased gas production by 35%, reduced methane content of the gas by 8%, increased the DM solubilized (by 2%) and increased methane production per unit substrate solubilized by 25%. Presence of the cloth bag increased gas production when it also contained biochar but decreased it when added to the biodigester without biochar. There was a similar interaction for methane produced per unit substrate solubilized."
http://www.lrrd.org/lrrd24/12/sang24212.htm?goback=.gde_2446475_member_243421682
Posted by Trlahh at 10:53 pm No comments:

Activity in Vietnam...
"Hawaii Biochar Products, a Puna, Hawaii based company will participate in a Vietnam Biochar industry testbed and training program. The program will further their mission to provide solutions for sustainable agriculture using organic materials and environmentally friendly processes."