The Great Change: Concrete Solutions: " We want to take the atmosphere back to its pre-industrial chemistry as quickly as possible. For that, we have biocomposites. &q...
Posted by Trlahh at 6:37 pm No comments:

The Great Change: Ground Up

The Great Change: Ground Up: " This is where biochar is today in agriculture. Its a better mousetrap in the midst of a huge rodent epidemic and still, most people c...
Posted by Trlahh at 12:31 pm No comments:

The influence of various biochars on crop yield and disease resistance of Capsicum anuumL. (sweet pepper) under modern, high-input, intensive net house cultivation was tested over the course of 2011 to 2014 in the Arava desert region of Israel. A pot experiment with Lactuca sativa L. (lettuce) grown in the absence of fertilizer employed the 3-year old field trial soils to determine if biochar treatments contributed to soil intrinsic fertility.

Biochar-based soil management can enhance functioning of intensive, commercial, net house production of peppers under the tested conditions, resulting in increased crop yield and plant resistance to disease over several years.
Posted by Trlahh at 3:05 pm No comments:

Biochar characteristics and application in the agriculture

Biochar characteristics and application in the agriculture [

Recently biochar gained importance as a way to deal with global climate change, by sequestering C into soils, but also as a soil amendment and bioremediation tool. Many studies have demonstrated the positive influence of biochar on soil quality and subsequently, plant growth, although the results are not consistent and climate seems to be the main reason for this inconsistency. Number of studies has been conducted to find out how biochar affect soil characteristic, fertilizers efficiency as well as soil microbiota. The main focus of this review is to discuss biochar features and it application in agricultural practices that could improve soil productivity and in consequence plant growth and development.

Biochar, although not in the form we know today, has been used since centuries. The incorporation of charcoal into the soil to enhance soil quality has been an agricultural practice for thousands of years (Xu et al. 2012). Pre-Columbian people were combining charred residues of organic and inorganic wastes with the soils that are known today as Terra Preta - rich in organic matter and nutrients Amazonian soil. The oldest description of charcoal use in agriculture may be from the 17th century Encyclopedia of Agriculture by Yasusada Miyazaki, where he cited an even older textbook from China. We know from there that rice husk charcoal has been used as a soil amendment probably since the beginning of rice cultivation in Asia (Ogava and Okimori, 2010). Nowadays, the term “biochar” refers to a product of biomass pyrolysis, wherein plant-based materials are heated under anaerobic conditions to capture combustible gases. Originally, biochar production was associated with slow pyrolysis, characterized by a long time (more than 10 h) under relatively low temperature, typically around 400°C. More recently, there has been growing interest in biochar production through fast pyrolysis, where the organic materials are rapidly heated to 450-600°C (Xu et al. 2012). The reason why biochar gained public interest is mainly associated with its carbon sequestration ability. Biochar is a promising tool to reduce the atmospheric CO2 concentration because it slows the return of photosynthetically fixed carbon to the atmosphere (Xu et al., 2012). The half-life of biochar in the soil is estimated to range from hundreds to thousands of years (Zimmerman 2010). Therefore, supplying the soil with biochar is a strategy for long-term carbon sequestration. Moreover, there is increasing interest in biochar as a soil amendment. Number of studies has demonstrated that biochar application can significantly improve crop productivity (Chan et al. 2007), improve soil conditions (Xu et al., 2012), and increase the efficiency of fertilizers (Asai et al., 2009), it can also be used in remediation processes (Chan et al., 2012). The main goal of this paper is to review the effect of biochar on soil properties and discuss it use in the agricultural practices.

Biochar became [could become?] an important tool to mitigate the climate changes caused by anthropogenic activities. But as it is presented above biochar can also be successfully used in agricultural sector. The literature review presented above suggests that biochar is a material that significantly affects soil quality by changing its structure as well as chemical composition. It can be used in the water stress management and in the bioremediation processes, particularly in recovery of the soils contaminated with PAHs and heave metals. There are a growing number of evidences showing positive effect of biochar on plant growth and development; however this effect is strongly related to the climate and soil type. Also, biochar when applied together with mineral or organic fertilizers seems to significantly improve fertilizer efficiency and use by the plant. Finally, biochar was found to cause important changes in soil microbiota structure and function and it is believe to create favorable conditions for microorganisms.

Posted by Trlahh at 6:43 pm No comments:

Hugh does a great job here linking chemistry and biology for biochar production and soil application...

If you are interested in biochar test methods, then you should also check out Hugh's expert advice in this video (poor sound quality)...
https://groups.yahoo.com/neo/groups/biochar/conversations/messages/21790

Posted by Trlahh at 6:21 pm No comments:

Could trees be the chemical recycling centres of the future?

Maybe UBC would be open to some collaborative research in SEA... FRIM and other regional forestry research groups may be good partners. 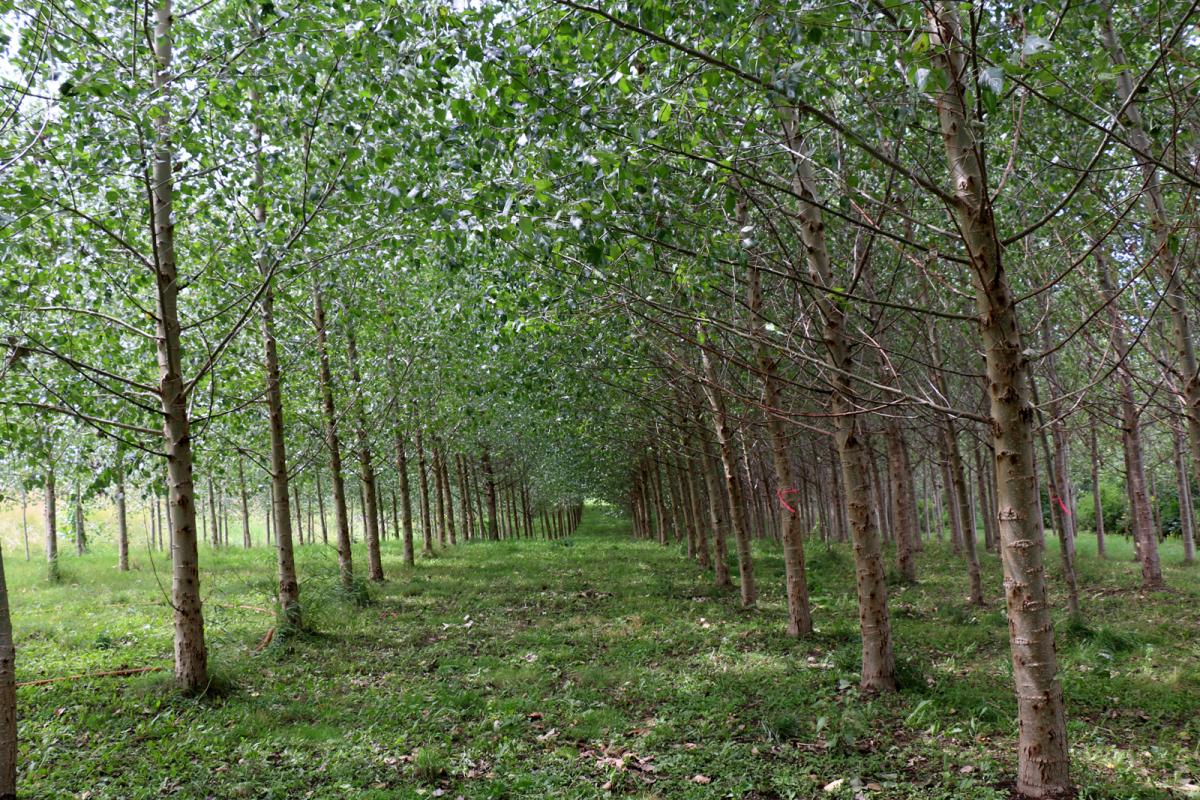 Could trees be the chemical recycling centres of the future?: Trees are pretty useful to humans: they produce oxygen, provide lumber, and, if a B.C.-based research project is successful, they might help society turn harmful contaminants into useful chemical products like natural fertilizer, insecticides, antibacterials and antioxidants. UBC Okanagan chemistry professor Susan Murch has partnered with local environmental remediation company Passive Remediation Systems Ltd. (PRS) to study how trees can absorb contaminated soil and change it into something usable.

"First, PRS harvests leaves and stems from its poplars and cooks them in a sealed oven to produce "biochar," a solid compound which can be used as material for 3D printing or mixed with compost to form a chemical-rich fertilizer. A by-product of the cooking process is "wood vinegar" — a steam extract that Murch and her team will analyse for useful molecules."
Posted by Trlahh at 12:05 pm No comments:

June 28, 2017 • 1:00- 2:30pm ET
The Stockholm Biochar Project was one of the winners of the Mayors Challenge funded by Bloomberg Philanthropies.  Prize money has helped fund the 1st of 5 planned facilities to convert urban green waste into heat and biochar which opened earlier this year. Once all five plants are operational, the city will be producing 7,000 tons of biochar per year while contributing heat to the city's district heating system.  City residents will be able to get bags of biochar in exchange for taking their organic waste to the processing facilities.
Mattais Gustaffson is the Project Manager and will provide an overview of the project to date as well as lessons learned and recommendations for others interested in replicating their efforts in other cities - to date they have had inquiries from nearly 100 other cities interested in carbonizing greenwaste.


Cost?
Free to IBI Members or $40 for non-members
To Register:
Registration includes access to the slides and a recording of the webinar.
IBI Members register here (go to the upcoming webinars section). Your event link will be emailed to you after successful confirmation about your membership status.
Non-IBI members register here.
Presenters:

Mattias Gustaffson
Mattias Gustafsson works as a consultant in biochar and renewable energy through his own firm EcoTopic. Ongoing assignments include project management, technical expertise and lectures both in Sweden and internationally. At the moment Mattias is the project manager for the Stockholm Biochar Project.

Moderator:  Kathleen Draper
Kathleen is a member of the IBI Board and Chair of IBI's Information Hub. She is also the US Director of the Ithaka Institute for Carbon Intelligence. The Institute is an open source network focusing on beneficial carbon sequestration strategies which simultaneously provide economic development opportunities both in the developed and developing world. She is an editor and writer for The Biochar Journal, sponsored by the Ithaka Institute. Kathleen also works with various different universities and individuals on projects that are investigating the use of biochar in cement and other building and packaging products to develop products with lower embodied carbon which can be made from locally available organic waste. She has written extensively about various topics related to biochar and is a co-author of the book "Terra Preta: How the World's Most Fertile Soil Can Help Reverse Climate Change and Reduce World Hunger".
For more information:
For more information or if you have any questions about registration please email Vera Medici at vmedici@ttcorp.com.
Want to become an IBI member?  Visit our membership page to help support IBI.
Posted by Trlahh at 11:14 am No comments:

This looks interesting for the wastewater industry... The full publication is available from the linked title.

"It has been reported that bacteria-mediated degradation of contaminants is a practical and innocuous wastewater treatment. In addition, iron oxide nanoparticles (NP) are wastewater remediation agents with great potentials due to their strong adsorption capacity, chemical inertness and superparamagnetism. Therefore, a combination of NPs and microbes could produce a very desirable alternative to conventional wastewater treatment. For this purpose, we first prepared Fe3O4/biochar nano-composites, followed by loading photosynthetic bacteria (PSB) onto them. It was found that Fe3O4/biochar nano-composites exhibited a high adsorption capacity for PSB (5.45 × 109 cells/g). The efficiency of wastewater pollutants removal by this PSB/Fe3O4/biochar agent was then analyzed. Our results indicated that when loaded onto Fe3O4/biochar nano-composites, PSB’s nutrient removal capability was significantly enhanced (P < 0.05). This agent removed 83.1% of chemical oxygen demand, 87.5% of NH+ 4 , and 92.1% of PO3− 4 from the wastewater in our study. Our experiments also demonstrated that such composites are outstanding recyclable agents. Their nutrient removal capability remained effective even after five cycles. In conclusion, we found the PSB/Fe3O4/biochar composites as a very promising material for bioremediation in the wastewater treatment. "

Posted by Trlahh at 2:13 pm No comments:

Another article on biochar use for soil remediation. The mining legacy is also a huge problem all over the SEA region.

Mining for answers on abandoned mines

"In the western United States 160,000 abandoned mines contaminate soils in the region. Ippolito, associate professor of soil science at Colorado State University, hopes to solve this problem with biochar, a charcoal-like substance that can reduce the toxic consequences of mining for metals"
Posted by Trlahh at 11:15 am No comments:

Biochar is produced by pyrolysis of biomass residues under limited oxygen conditions. In recent years, biochar as an amendment has received increasing attention on composting and soil remediation, due to its unique properties such as chemical recalcitrance, high porosity and sorption capacity, and large surface area. This paper provides an overview on the impact of biochar on the chemical characteristics (greenhouse gas emissions, nitrogen loss, decomposition and humification of organic matter) and microbial community structure during composting of organic wastes. This review also discusses the use of biochar for remediation of soils contaminated with organic pollutants and heavy metals as well as related mechanisms. Besides its aging, the effects of biochar on the environment fate and efficacy of pesticides deserve special attention. Moreover, the combined application of biochar and compost affects synergistically on soil remediation and plant growth. Future research needs are identified to ensure a wide application of biochar in composting and soil remediation.
Posted by Trlahh at 11:06 am No comments: