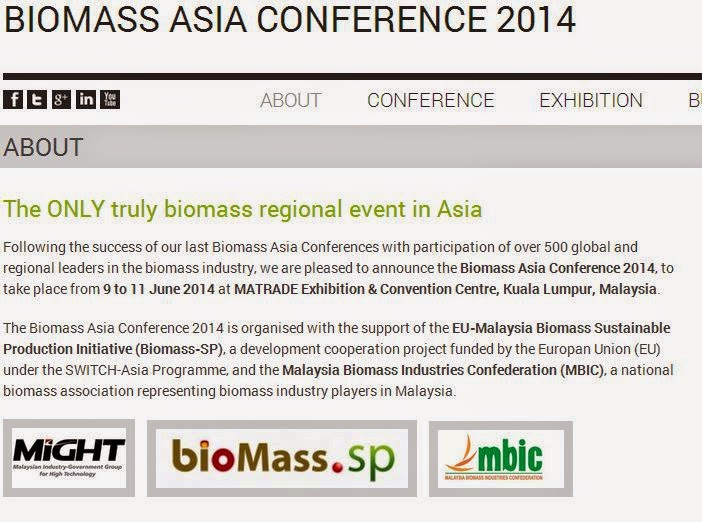 From this link: http://biomass-asia.org/?p=223 there was some intent to have a biochar component to this conference...

But based on the available program, it seems that there may not now be any specific papers. 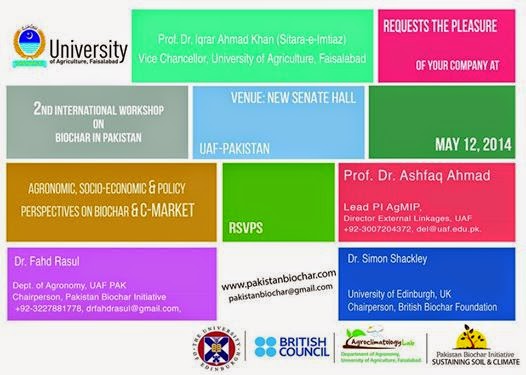 2nd International Workshop on Biochar for Climate Friendly Agriculture. "Agronomic, socio-economic and policy perspectives on biochar and C-Market" to be held on 12th May, 2014 at University of Agriculture Faisalabad-Pakistan. You are welcome to join in...

Posted by Trlahh at 8:56 am No comments:

Biochar in Agriculture - Perspectives for Germany and Malaysia

The above image links to a website dedicated to a research project that includes participation of University Putra Malaysia (UPM) who have been quietly undertaking biochar research for a number of years.

"Aims of this project are research activities on the use of charred biomass material (biochar) in agriculture to provide a better understanding of economic and environmental potentials of biochar. A special focus is set on the GHG mitigation potential of biochar use and its economic costs. The holistic challenge will be analyzed in a consortium led by the Leibniz-Institute for Agricultural Engineering Potsdam-Bornim e.V. (ATB) in cooperation with the Leibniz-Centre for Agricultural Landscape (Zalf), the German Institute for Economic Research (DIW), Technical University of Berlin (TU), Humboldt-University Berlin (HU) and the University of Putra Malaysia (UPM)."

Note the two newsletters that are available from the website. These provide project status information for July 2013 and March 2014. The latest newsletter reports the following...

"Pot Experiment on N-Fertilizer Leaching and Crop Uptake
Azni Idris, Rosenani Abu Bakar, Tinia Idaty Mohd. Ghazi, Mohd Amran Mohd Salleh, Sherwin Lee Chan Kit (University Putra Malaysia)
The aim of our study is to determine the effects of oil palm  empty  fruit  bunch  (EFB)  biochar  on nitrogen (N)  fertilizer recovery,  crop uptake,  and N  leaching using 15 N  labelled  fertilizer. A pot experiment was conducted  under  a  rain  shelter using maize as the test crop and soil type used for planting was clayey sandy soil. The experimental design was random complete block (RCBD) with 6 blocks and treated with four rates of EFB biochar; 0 (control), 5, 10, and 20t/ha. After incubating the soils in the pots for 2 weeks, EFB biochar was  applied at the top 20 cm of the soil and only one maize  was planted per pot. The maize plants were fertilized at 10 days old with ammonium sulphate [(15NH4)2SO4]  labelled  with 15N, triple superphosphate (TSP), and  muriate of potash (MOP) at the rate of 30:30:30. The  same fertilizer rate was applied again when the maize reached 20 days old and final fertilization at the rate of 20:20:20 was applied at the age of 35 days old. Induced leaching was started 2 days after the first fertilization and continuously done once after every 4 days until silking stage of the maize. The total leachate was measured while ammonium (NH4+) and nitrate (NO3-) concentration in leachate was analyzed using steam distillation method with MgO and Devarda’s alloy, respectively (Bremner, 1965). At silking stage (56 days  old),  tissue  sample was harvested  to  be analyzed for dry matter weight, N content, total N, P, K, Ca, and Mg, while pot soil will be analyzed for 15N content, total N, C, P, pH, electrical conductivity (EC), cation exchange capacity (CEC), and exchangeable cations (K, Ca, and Mg). From the results obtained so far, EFB biochar has the ability to increase water holding capacity (Laird et  al., 2010) and reduces leaching. Hence, the volume and frequency of watering can be reduced and lesser nitrogen (N) fertilizer will be lost due to leaching. The biochar acts like a cache for water and indirectly holds more soluble plant nutrients, especially N. This could be the reason why maize that were treated with EFB biochar have greater biomass than the control (Figure 3). Future work of analyzing 15N in the maize tissue and pot soil using isotope ratio mass spectrometer (IRMS) will support this theory. "

Posted by Trlahh at 1:20 pm No comments: