World Bank on Biochar Systems for Smallholders in Developing Countries

The World Bank has recently published the report entitled, 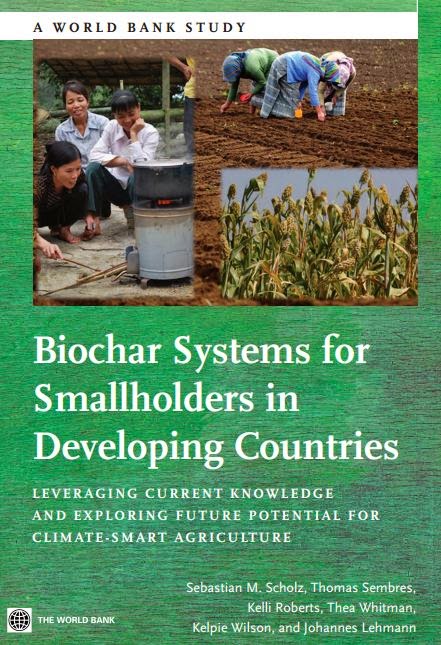 Biochar is the carbon-rich organic matter that remains after heating biomass under the minimization of oxygen during a process called pyrolysis. There are a number of reasons why biochar systems may be particularly relevant in developing-country contexts. This report offers a review of what is known about opportunities and risks of biochar systems. Its aim is to provide a state-of-the-art overview of current knowledge regarding biochar science. In that sense the report also offers a reconciling view on different scientific opinions about biochar providing an overall account that shows the various perspectives of its science and application. This includes soil and agricultural impacts of biochar, climate change impacts, social impacts, and competing uses of biomass. The report aims to contextualize the current scientific knowledge in order to put it at use to address the development climate change nexus, including social and environmental sustainability. The report is organized as follows: chapter one offers some introductory comments and notes the increasing interest in biochar both from a scientific and practitioner's point of view; chapter two gives further background on biochar, describing its characteristics and outlining the way in which biochar systems function. Chapter three considers the opportunities and risks of biochar systems. Based on the results of the surveys undertaken, chapter four presents a typology of biochar systems emerging in practice, particularly in the developing world. Life-cycle assessments of the net climate change impact and the net economic profitability of three biochar systems with data collected from relatively advanced biochar projects were conducted and are presented in chapter five. Chapter six investigates various aspects of technology adoption, including barriers to implementing promising systems, focusing on economics, carbon market access, and sociocultural barriers. Finally, the status of knowledge regarding biochar systems is interpreted in chapter seven to determine potential implications for future involvement in biochar research, policy, and project formulation.


There's a bit of a buzz in the biochar community over these type of cone kilns (TFOD) and 'Moxham' kilns. Backyard biochar has led the way on this... http://backyardbiochar.net/

Although not stated, I think this video has been put together by Hans-Peter Schmidt at the Ithaka Institute in Switzerland during a recent visit by Paul Taylor.

This type of simple, low cost, versatile and relatively clean biochar production may be the way forward for many home biochar production scenarios. It looks particularly suitable for unprocessed woody biomass. It may even offer a better solution than 200L TLUD's for my suggested haze reduction project.

I will be visiting the Ithaka Institute later this month and hope to progress biochar plantation trials later in the year. The plantation companies will want to see some economic validation for biochar before there is any investment in biochar production or large scale support for developing plantation biomass to biochar projects.

Posted by Trlahh at 4:06 pm No comments:

I've been collaborating with Dr Francis Ng and Alfred Cheong on an article describing the historical and ongoing use of biochar in Bandar Utama, a township within Kuala Lumpur. Biochar related activities began in Bandar Utama in 2002 culminating in the Secret Garden opening in 2009 and ongoing commercial applications in urban landscaping. Hopefully the article will be completed in August.

During my visit yesterday, I was introduced to some of Dr Ng's extensive plantings that I had missed on previous visits. The photo below finds Dr Ng next to a very healthy looking camellia sinensis or tea bushes. Also nearby were arabica, robusta and liberica coffee plants... all happily living with their feet in 50% carbon.


A new brochure has been printed for the Secret Garden and this now provides back-ground details on the biochar soils that have been used in the garden. You can access a scan copy of the brochure / guide from here.

Here's a campaign worthy of support. Josh Kearns has a long history of good work in Thailand. This is a very well presented pitch...
https://experiment.com/projects/can-biomass-char-remove-toxic-synthetic-chemicals-from-drinking-water

"Toxic synthetic chemicals such as pesticides and pharmaceutical residues are a major threat to drinking water safety worldwide. Low-cost, environmentally sustainable and locally managed treatment technologies are needed to protect human health in impoverished, rural and remote communities. This research project demonstrates the potential of char made from surplus biomass (biochar) as an effective sorbent for chemical toxins."
Posted by Trlahh at 9:35 pm No comments: